November 14, 2013
The latest PMA business conditions report is out and it looks like good new for metalformers.  The monthly survey of metalforming companies reveals that more than 25% of companies expect economic activity to improve over the next three months. 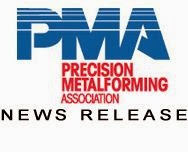 CLEVELAND, OH—November 13, 2013—According to the November 2013 Precision Metalforming Association (PMA) Business Conditions Report, metalforming companies expect an improvement in business conditions during the next three months.  Conducted monthly, the report is an economic indicator for manufacturing, sampling 124 metalforming companies in the United States and Canada.

“Metalforming companies are generally anticipating that orders and shipments for year-end 2013 and early 2014 will continue to reflect flat to modestly higher levels of activity, compared to today’s levels,” said William E. Gaskin, PMA president.  “PMA’s Monthly Orders and Shipments Survey, which measures actual results vs. expected activity also reflects this trend, with orders and shipments for all of 2013 trending slightly above the 12-month rolling average for the past year, with the exception of February and July, when current data dipped below the trend line for a single month before returning to positive territory.  The automotive market continues to be the most consistent performer in 2013.”