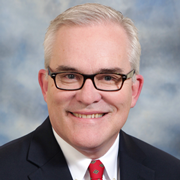 With a pedigree steeped in engineering, manufacturing and our industry’s workpiece metals of choice, Roy Hardy assumed the leadership position at PMA as its new president on May 15, 2017. He succeeds Bill Gaskin, who retired at the end of May after 40 years of service to the metalforming industry.

A self-described third-generation metals man–his grandfather worked in a ductile iron foundry for 35 years and his father’s career was spent as a metallurgist at Huntington Alloys–Hardy has had a lifelong fascination with this type of work.

“As a kid on plant tours where my dad worked, I watched metal being poured, twisted, bended, recycled to be used again…I’ve always wanted to be a metals guy,” he says.

Graduating from the University of Cincinnati with a bachelor’s degree in Metallurgical Engineering, Hardy worked his way through nearly every link of the metal-parts supply chain, then owned a company supplying steel mills, the heat-treating industry and forging companies. For the past eight years, he served as president of the Forging Industry Association.

“PMA’s mission is to assist members in being more competitive in the global economy, and I know we can compete if it’s on a level-playing field,” Hardy says, “so we will continue to be active in government advocacy telling the PMA story.”

Recognizing that PMA’s effectiveness as an advocate is directly related to its size and strength, Hardy seeks an increase in membership in coming years and more engaged members.

“If we can grow PMA membership to 30 percent of the metalforming industry, we can increase PMA’s clout in Washington, D.C., giving us a bigger voice for the industry. In addition, we need to continue bringing our people together through networking opportunities. Part of that involves empowering and energizing our local districts, the backbone of PMA. Future leaders are found in the districts, and they serve as our first line of communication as to what’s going on, what’s new and what are the concerns.”

Key to competitiveness is linking members to the latest, most effective technology, making PMA “a matchmaker for members and technology,” as Hardy says. “We want to expose members to what’s going on related to technology. International conferences and tradeshows are ideal for technology transfer, so PMA will continue to be active in these areas.”

To address the industry’s challenge of finding and retaining qualified associates, Hardy stresses the need for workforce-development programs “to develop the talent we already have, and train managers as future company leaders.”

And, he sees PMA’s Educational Foundation as instrumental in helping address the skills shortage by raising awareness among the general public, and assisting and funding PMA’s efforts to deliver training via an online learning-management system as well as workshops and seminars.