June 11, 2018
Nearly three months after the President’s announcement of Section 232 tariffs on steel and aluminum, American manufacturers are struggling to compete in a global market. This week, the front page of the Washington Post featured PMA Board Member Bill Adler, president and owner of Stripmatic Products in Cleveland, OH.

In the story titled “This Ohio factory thought it could bring U.S. jobs back from China. Then Trump got involved,” David Lynch writes:

As steel prices in the United States rise, Adler worries they will pinch his employees’ bonuses and profit-sharing checks. The 25 percent increase in Stripmatic’s sales that he anticipated from the sausage stuffer contract, the $1 million in new factory investment and the 10 new jobs it would have created have evaporated.

“If it wasn’t for the increase that came on because of the threat of tariffs, then I honestly believe we’d be supplying these domestically,” Adler said of the machines that pack ground meat into sausage casings. “This directly affects my life, my employees, my investments.”

The most common misconception about these tariffs on imported steel and aluminum is that raising the prices of foreign metals will lower the prices of domestic metals. However, with tariffs imposed, domestic producers also raise prices, and the sudden limited availability of affordable products often results in increased lead times for orders and increased stress for American manufacturers. As Adler describes in the article, it is common for manufacturers to lose opportunities that would keep their companies afloat because of the mere threat of tariffs.

PMA is an active member of the Coalition of American Metal Manufactures and Users. The Coalition created the helpful infographic below to explain the realities surrounding common misconceptions about the impact of tariffs on domestic metal prices and American jobs. 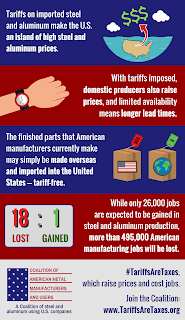 For more information about the Coalition please visit tariffsaretaxes.org and follow @tariffsaretaxes on Twitter. Feel free to share this infographic on your social media channels to spread the word on the harmful reality American manufacturers are facing because of tariffs on steel and aluminum.