The United States has been engaged in an ongoing dispute with the European Union (EU) regarding EU subsidies to Airbus. The U.S. has initiated a Section 301 investigation to enforce its rights in the dispute that could result in high tariffs on a range of EU imports. The United States Trade Representative (USTR) published a list of EU exports that could face a 100-percent tariff that included copper-based alloys from the European Union. Tariffs on these imported alloys would be devastating to many PMA members because there are no U.S. mills that can replace these products.

PMA is taking a lead in opposing these tariffs. PMA President David Klotz and several PMA members, including Dan Kendall, president, ABC Metals; Charles Bernard, president, Eagle Metals; and Michael Jemison, chairman, Heyco Metals, testified in Washington, D.C., at an August 5 hearing about the proposed tariffs organized by the office of the USTR. In their testimonies, PMA members strongly urged the USTR not to impose tariffs on copper-based alloy metals from the EU because the United States simply does not manufacture these critical inputs to the quality or specifications needed by customers. They warned that imposition of tariffs would likely lead to manufacturers moving to offshore production. 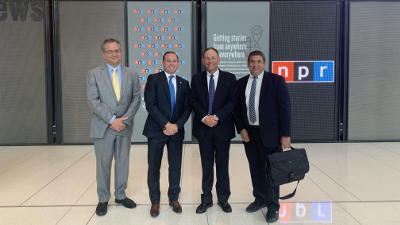 Following the hearing, David Klotz and the several of the PMA members visited National Public Radio where they were interviewed by NPR’s senior economics correspondent about the proposed tariffs. They also were interviewed later in the day by the D.C. Bureau Chief for the Pittsburgh Post-Gazette. PMA will continue to work in Washington on behalf of members to urge the government to not impose tariffs on copper-alloy imports from the EU. USTR will publish a final list of product if it decides to move forward. The timeline is not set at this time but a final decision will likely come after the World Trade Organization (WTO) make its determination on the amount of countermeasures the United States may impose on the EU.