The US Manufacturing Recession Seems to Be Over, According to Goldman Sachs

April 04, 2016
New data from Goldman Sachs was released this Tuesday showing a significant manufacturing rebound. Regional surveys were conducted to look at the state of factories in the Federal Reserve districts of Dallas, Kansas City, New York, Philadelphia, and Richmond, and all five showed significant improvement in March. Check out the graph below: 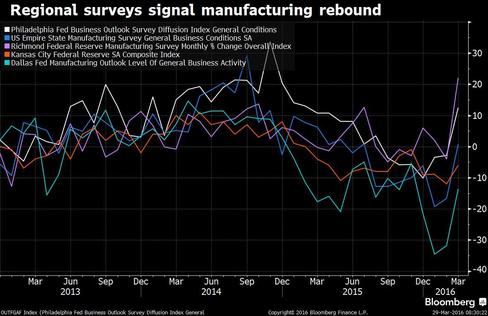 These results aren’t outliers, either: according to the analysts on this project, the surge shown in these surveys is supported by many other aspects of manufacturing including trucking activity, railcar volumes, and seaborne container traffic.

Goldman even predicts that the ISM Manufacturing Purchasing Managers Index will exceed 50 in the coming update to this data on Friday, April 1. (50 is the metric in the ISM scale that divides contraction and expansion.)

Our favorite way of describing this data comes courtesy of Luke Kawa in his Bloomberg article: “The U.S. manufacturing sector just batted five-for-five in its version of spring training.”